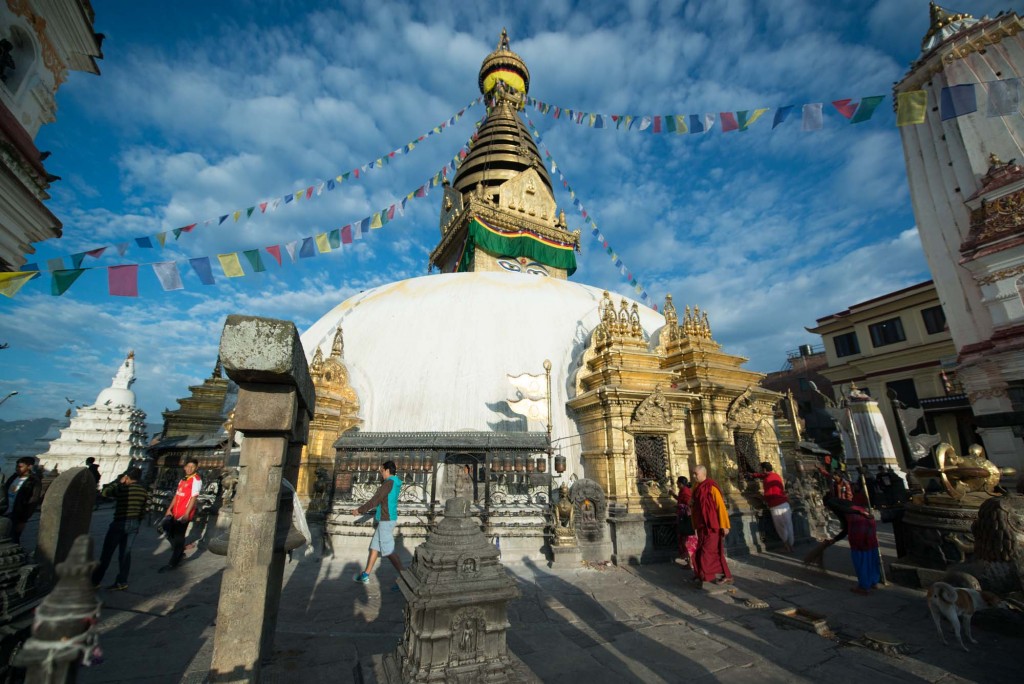 In this episode of Far East Adventure Travel the Podcast, a virtual walk in real time up the steps to one of the great Buddhist pilgrimage sites of Nepal. Swayambunath-The Monkey Temple at sunrise.

Swayambunath or The Monkey Temple is one of the most significant temples to Tibetan Bhuddists of Nepal, perhaps only coming second in importance to Boudhanath, the largest stupa in the country.

It is also called the Monkey Temple because holy monkeys live here. Why are they considered holy? It is said that Manjushri the bodhisattva of wisdom and learned raised the hill that Swayambunath sits on. When he let his hair grow long, lice grew eventually transforming into monkeys.

This is a virtual walk in real time up the 365 stairs that lead to the platform of Swayambunath.

Much of the inspiration of the temple comes from Newar Buddhism. The Newars are the indigenous people of the Kathmandu Valley.

The Monkey Temple is an important site for many followers of other Buddhist schools and is also a place of worship for Hindus. It is one of the oldest religious sites in Nepal with evidence suggesting work began on a temple here in the 5th century.

My favorite time to come is at sunrise. It’s also a popular fitness site for locals. The time it takes to reach the top can take anywhere from 5 to 15 minutes depending on your physical fitness level. Some days you will see police or Nepali army training here.

This was the largest group of monkeys I’d ever seen at one time on the stairs in the 5 years I’ve been visiting Swayambunath. They will usually leave you alone as long as you’re not carrying food they can see as with most monkeys that share habitat with humans.

The Tibetan name for this site means sublime trees for the various trees found on the hill.

The Monkey Temple can also be accessed from a car road from the south leading to the southwest entrance. This is my favorite route and I think the more picturesque of the two access points with definitely more of a pilgrimage feel. Pratap Malla the powerful king of Kathmandu was responsible for the construction of this stairway in the 17th century.

You’ll see many small stupas along the way, perhaps containing relics or the remains of past lamas. And of course many statues of the Buddha.

This final stretch to the top is the steepest section. It’s after 6am and activity has already been underway at the temple.

Seeing these pilgrims singing reminded me of how sacred and special Swayambunath is.

This is where you’ll get your first look at the 13 pinacles at the top of the giant stupa, symbols of the 13 steps to enlightenment or Buddhahood.To the left is the ticket office where you’ll need to pay the 200 Nepali Rupees entrance fee.

The wild dog welcoming party acting like keepers of the gate. On the right the vajra or giant thunderbolt, a symbol of firmness of spirit and spiritual power, and the first sign you’ve arrived on the platform of The Monkey Temple.

The white dome of the stupa represents the world. When a person awakens from the bonds of the world the eyes of wisdom and compassion are opened represented above the dome facing all four directions with the third eye in the middle, allowing one to see the world through the mind. The curly symbol where a nose should be is the Nepali character for number 1, which symbolizes unity of all things and that there is only one way to enlightenment-through the Buddha’s teachings. And the last stage the 13 pinnacles to enlightenment.

The Swayambhu Purana is a Tibetan scripture about the development of the Kathmandu Valley. According to it’s writings the valley was once a giant lake with a lotus growing out of it.

Manjushri had a vision of the lotus and traveled to worship it. When he saw that the valley would make a good settlement he drained the lake. The lotus turned into a hill and the flower became Swayambunath.

As with many stupas and shrines you will see Buddhists and Hindus walking clockwise around the stupa every morning as part of their prayer ritual, chanting and repeating mantras. Prayer wheels are also spun clockwise, another form of gaining merit or good kharma.

The temple complex contains many shrines with deities, a monastery, some shops as well as stupas containing relics. And of course, monkeys and wild dogs.

The joy is infectious. In 2010 the temple saw the first renovation completed since 1921 and the 15th in the 1500 years since it was built. With the recent setback and damage from the earthquake of 2015 much work will be needed to restore Swayambunath back to the state you’ve seen it in this podcast. It is not a challenge beyond the strength of it’s supporters and followers as evidence from its’ past.

Their belief and preservation of this 1500 year-old site follows the same path as the inspiration for this temple. Like the Buddha once said “I never see what has been done, I only see what remains to be done.”

That’s it for this episode, on the next Far East Adventure Travel Podcast I will travel to Nepal for news and updates on recovery from the earthquake.

Until next time this is John Saboe, safe travels and Namaste.

“Buddhist Monks Of Kathmandu Chanting In A Temple” by Jani Hirvonen (http://omhasva.blogspot.com/)