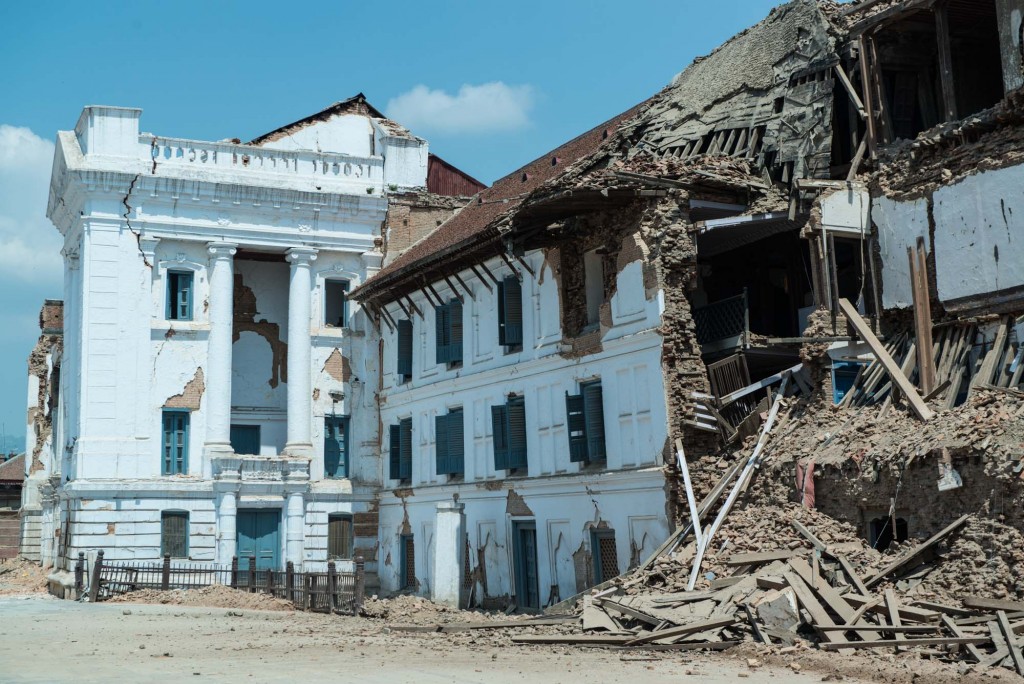 The Gaddi Baithak building in Kathmandu’s Durbar and Basantapur Squares heavily damaged after the earthquake on April 25, 2015

Kathmandu’s Durbar Square is one of three royal squares in the Kathmandu Valley. The other two are located in Patan, and Bhaktapur. After the April 25 earthquake the square was shut down to the public. Many volunteers and military cleaned up the area of debris from the buildings that were completely destroyed including the Maju Deval and the Trailokya Mohan Narayan Temple.

The very famous Black Bhairab statue. Bhairab is an incarnation and fearsome aspect of Shiva, the Hindu God. It is said that Pratap Malla, the great King of Kathmandu in the 17th century brought the statue here. It is made of a single stone. The upper left hand corner has been repaired but the last earthquake seemed to have left no mark on this imposing image.

Although not in it’s normal state it seems that everyone worked extremely hard to get the square in shape so it could be a safe place for the public to once again enjoy as a social and spiritual center of Kathmandu.

As you can see the Hanuman Dhoka, the former palace area built by Pratap Malla received major damaged from the April 25th earthquake. In the great earthquake of 1934 many buildings of the palace were lost.There were several more courtyards as part of the original complex that no longer exist. To the left this building houses many shops which are currently closed.

Another view from atop the Trailokya Mohan Narayan Temple, the Garuda statue that sits at the foot of the platform appeared to be free from damage.

Another view of the Maju Deval, a center of activity in the square completely gone except for it’s 9 tiered platform. Now that the square is open to the public again it’s still used as a meeting spot despite the loss of the temple.

Looking towards Basantapur Square on the right the Kumari Bahal with some damage but the main structure still standing. This is the home of the Kumari girl who is selected every few years to be the towns living goddess until she reaches puberty, when she reverts back to being a mortal. A building next to the Kumari Bahal with severe damage from the April 25th earthquake.

The Gaddi Baithak which is done in a completely different style then most of the traditional Newari architecture of the square. It’s said this building was inspired by London’s National Gallery and was built as an extension of the Hanuman Dhoka palace in 1908. This building also appeared to have received major damage

This is the top of the Maju Deval where a large triple roofed temple once sat, now just a Shiva lingam or phallic symbol remains.

Finally one last look from the square from the top of the Maju Deval platform. Much to rebuild, but many sites still remain and most importantly the human spirit of Kathmandu felt like it was starting to rise back up from the past devasting few weeks. Durbar Square’s most important element, it’s people were back.

Please like Far East Adventure Travel Nepal on Facebook. You can also follow me on Twitter, Periscope and Google+. All of the links are at fareastadventuretravel.com. More to come from Nepal. Until next time this is John Saboe, safe travels, and Namaste!