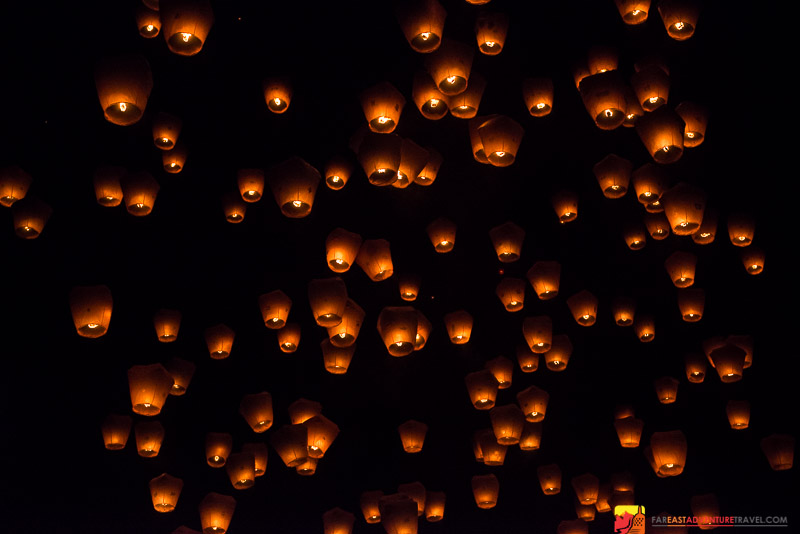 The town of Pingxi, in Northern Taiwan. Home to one of the biggest New Year’s celebrations on the planet. The Pingxi Sky Lantern Festival. Celebrating the end of Lunar New Year festivities on the island. Pingxi is a small town with a big heart. It opens it’s doors every year for people from around the world to come just to see the lantern festival.
The Discovery Channel actually voted The Pingxi Sky Lantern Festival as the second biggest new year’s festival in the world.

The main sky lantern releases, there are several, start after 6pm but that doesn’t stop people from celebrating early with their own personal release. Writing on the lantern their hopes and prayers for the new year.

Many shops or vendors sell the paper lanterns right along the train tracks and help customers send their lantern into the sky. They’ll even warn you when the train comes. Usually every 15 minutes.

A walk through the old street before it’s time to head to the school grounds where the main event takes place.
It’s a rainy night but that’s hasn’t stopped hundreds of thousands of people from attending, including many celebrities and the president of Taiwan.

Finally the first release…and I now I get it. Why people make such big deal out of this event. The lanterns seem to hold a power over everyone. Time stands still in these few moments. The beauty of the night sky illuminating with the lanterns, and the hopes for the new year. One more release before we go.