Shoot To Kill Orders For Tigress In Northern India

A man-eating tigress has a death warrant in Uttar Pradesh, India. Since December the tigress has killed 10 people and the state will no longer tolerate it.

I recall on my last visit to Ranthambore National Park in India a story of a tiger that had killed one of the conservation officers. When asked why the tiger wasn’t shot I was told the tiger was acting in defence and in fact was not a man-eater. Apparently it is a very different situation in the Sahuwala Forest of Uttar Pradesh.

(CNN) – A mystery is unfolding in India, and it’s one that is creating panic throughout northern villages.

A massive search is on to find a tiger that has been on the prowl for two months. But why is this killer cat preying on humans and where is she hiding?

Deep inside Sahuwala Forest in India’s Uttar Pradesh state is the hunt for a large man-eating tigress on a rampage.

“It is, but you have to be very careful because it’s not just a tiger it’s a man eater,” hunter Rana Pratap Singh said. “If a tiger attacks you, you stand no chance because with one swipe it can crush your skull.”

She’s believed to have killed at least 10 humans since late December.

Even though hunting tigers is illegal in India, there are only 1700 in the wild, shoot on sight orders are now in place.

Live bait is set up, and this is how it works: the hunters have kept a live calf in place as bait for two days. They put him over a sandy area so it’s easier to detect the tigress’ pug marks, and nearby is a platform from which they will be watching, especially in the evenings, just in case the tigress falls for the trap.

Avid hunter Rana Pratap Singh says he’s killed 15 man-eating leopards, but never has it been so difficult to track an animal.

“It’s such a massive jungle,” Udas said. “How do you even begin looking for a tiger here?”

“When a tiger moves, all other animals give a danger call whether it’s a langur, a monkey, a deer,” Rana Pratap Singh said.

“So that’s what leads you to the tiger?” Udas said.

“Yeah when we were walking we heard calls, the calls are different for a leopard or a tiger, you can sense the danger in the call,” Rana Pratap Singh said.

We follow the danger calls. Singh and his team have been tracking the tigress every day for the past month.

What makes the search so challenging is that tigers are elusive by nature and they can hear their prey from hundreds of meters away.

Then we find some fresh paw prints. The ranger compares them to those of the man eating tigress found near the ten victims.

The measurements match and curves confirm she is a tigress, but the depression of the paw print is slightly different.

“Yes there’s a marked difference in the rear pad, the one we have is a little rounder, this is more pointed,” Rana Pratap Singh said.

“Do you feel dejected?” Udas said. “You’ve come all this way.”

“No not at all,” Rana Pratap Singh said. “This happens every day.”

For those with a passion for the forbidden sport, it’s about the search more than the kill.

Where the tigress may be hiding in the vast 67 square kilometer forest and why she’s killing human beings is still a mystery.

Theories vary depending on whom you ask. Some believe she is injured and is preying on humans because they are the easiest species to capture. Others say she’s lost her cubs and is wandering in search of them.

Back at the outpost, competing groups have converged. Another set of hunters claim they too found fresh pug marks in a different location.

Wildlife conservationists nearby are armed with tranquillizing guns. Their objective is to sedate the tigress before the hunters get to her.

“Our goal is to save the life of a tiger,” Dr. Devander Chauhan said. “Hunter’s job is to kill the right tiger. So everyone has a different agenda.”

The techniques are similar: listening to the sounds of the forest, looking for paw prints.

“Locals say they found fresh pug marks just this morning about a kilometer from here,” Udas said. “And we’re on specially trained elephants, because experts say it’s the best and safest way to track a tiger.”

And the fear that she may strike again at any moment is still looming. 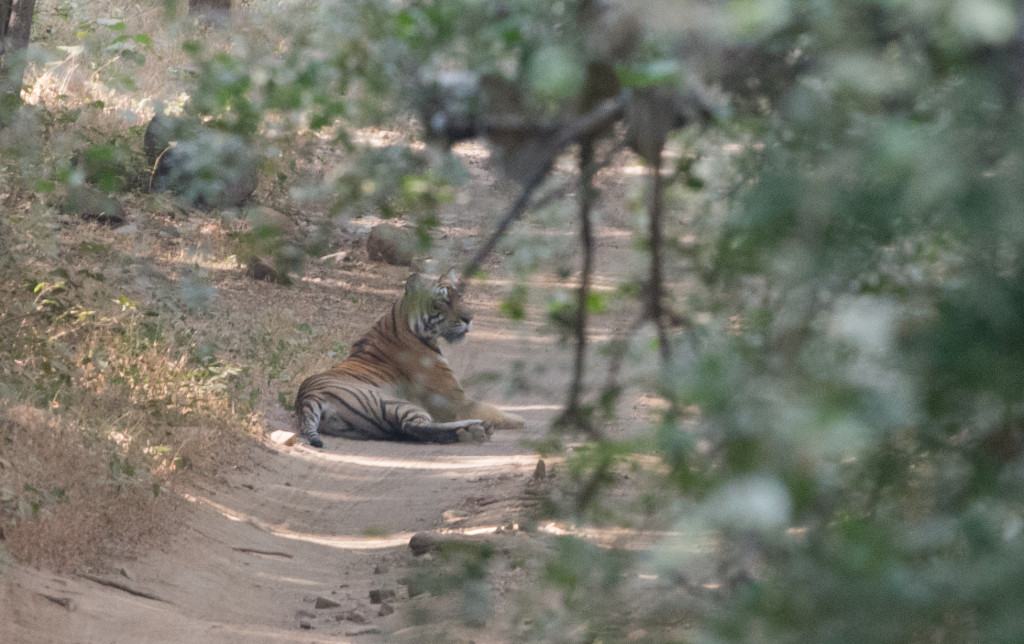