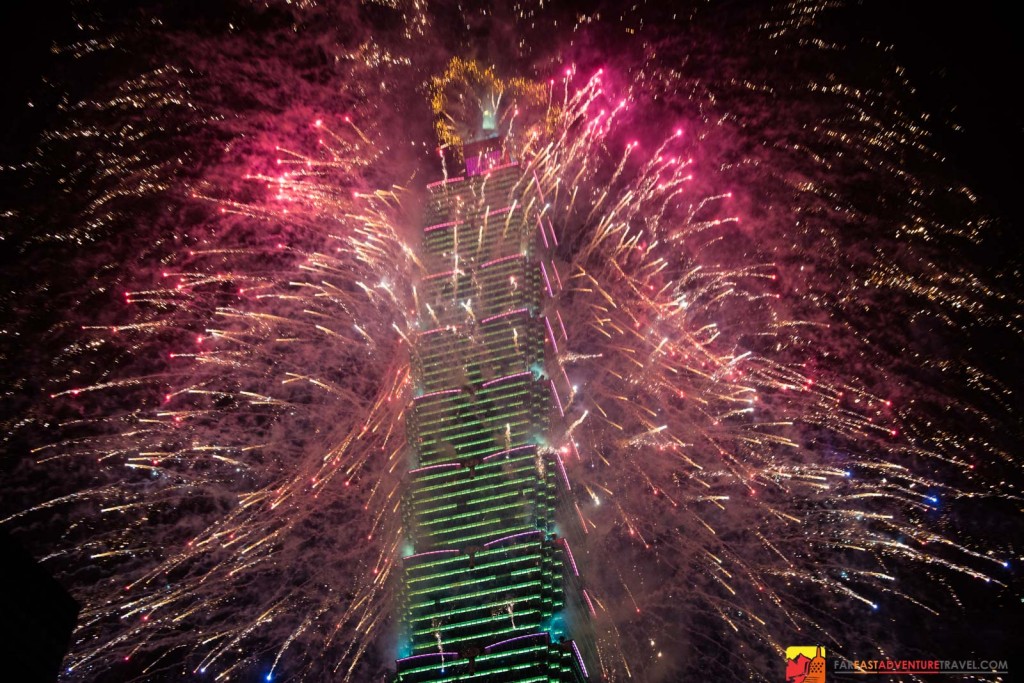 Hi this is John Saboe and this was the scene a few hours before the huge fireworks display at Taipei 101 New Year’s Eve.

Taipei has been celebrating New Year’s eve with a fireworks show at Taipei 101 since construction was completed on the landmark building in 2004. The fireworks rockets are launched right from the section balconies every year. The shows have ranged anywhere from 35 seconds in length all the way to 288 in 2010 when the 100th anniversary of The Republic of China was also celebrated. This year promises a 218 second show with the theme iSee Taiwan, Cherish Taiwan, and four segments of the show representing the four seasons of the year.

Things were buzzing everywhere. Hundreds of thousands of people show up for the event with all of the main streets closed off to traffic around the Xinyi Shopping District where Taipei 101 is located.

Of course anything illuminated is going to be a big hit on this night. Hmmm, I was thinking a duck torch.

This very attractive DJ was drawing a crowd with her music and moves. OK stop horsing around and find a spot where you can watch the fireworks. I’ve got lots of time just hold on there a minute. Hold your horses! Oh wait a minute I get it! It’s still Year of The Horse! That doesn’t change until the new Lunar New Year or Chinese New Year in February when it’s The Year of The Sheep.

One more snack before I find a spot where I can watch the fireworks. Squid-youyu-I love the grilled version they make here.

From 2004 until 2010 Taipei 101 was declared the tallest building in the world, only to lose it’s title in 2010 to Dubai’s Burj Kalifa. It has 101 floors above ground and 5 floors below.
Well I found a seat and it’s about to begin. The annual fireworks tradition from Taipei 101, in Taipei, Taiwan. Enjoy!