Trek To Kanchenjunga Base Camp – The Series (Part 1)

It was my third visit to Nepal. The first time I would enter the far eastern region to trek to Kanchenjunga, the third highest mountain in the world and it’s base camp. Our flight would take us to Biratnigar, where we would hire a car for an 8 hour drive to Taplejung, the start of our trek.

The great himalayas in the distance. Everest, Makalu, and Kanchenjunga. We arrived at Biratnigar airport. Our journey had barely begun when frustration had already set in. You can see it on Hari’s face. Hari was my guide. It was the Hindu Festival of Diwali and the drivers were demanding three times their normal rate. We finally tracked down a reasonable driver and were on the road after four hours of waiting around the airport. One last stop at our driver’s house so he could pick up a change of shoes for the long ride.

The road was full of turns. And we were in a hurry to make up for lost time. It was the first time I was car sick since I was a little boy. This was such an amazing place and there was a special energy, spirit in the air. But I felt like shit. We found a place where we could get some food and rest for the night.

After dinner we were surprised by a group of men who entered the dining hall to entertain us with Diwali songs. They were all from The Nepali Special Police Unit. In the area to keep things under control during the first nationwide elections in five years. They were so kind, so inspiring. I forgot how bad I felt.

We left the guesthouse at 4am for the final few hours of driving before we reached Taplejung. We stopped for tea breaks in some of the villages along the way.

Finally we reached Taplejung. The starting point for most trekkers and climbers heading into the Kanchenjunga Nature Reserve. This area is the least travelled of almost all the trekking routes in Nepal.

We would head up to the reserve through the villages of Chirwa, Sekathum, Amjilossa, Gybala, until we would reach Kanchenjunga north base camp. This area of the region is considered subtropical and is lush with bamboo and fertile hills. Village life is everywhere amongst the huge crops of rice, corn, and millet.

We were trekking during the last days of Diwali so people including these children were still in a festive mood.

One of many steel suspension bridges encountered along this route that continuously traverses up and down the valleys making for long, hard, but rewarding days of trekking. This one was just before our first night in Mitlung. 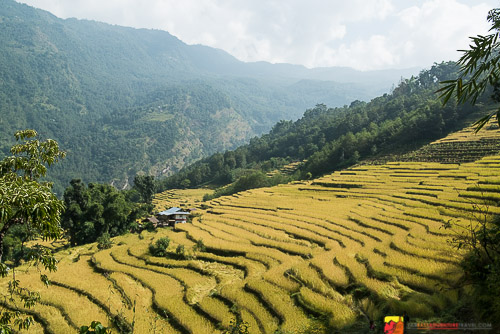 The Kanchenjunga Region of Nepal – Near The Village Of Chirwa