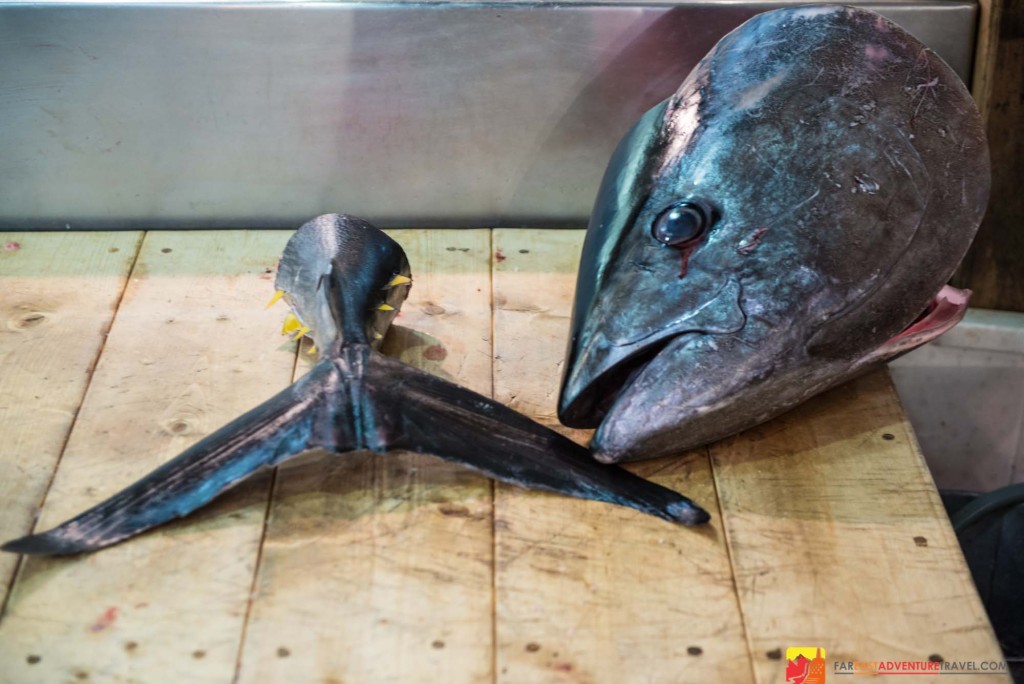 The remains of a processed blue fin tuna, the most sought after fish in Tsujiki Market, Tokyo-the largest wholesale fish market in the world

Tsukiji Market-Tokyo, Japan. Home to the world famous tuna auction where wholesalers bid on blue fin tuna worth tens of thousands of dollars almost everyday. For the lucky few who brave the early morning hour like myself recently it’s a chance to get up close to this unique arena of high stakes bidding on the most prized fish in the world.

The lucky few? 120 to be exact. Some of the guidebooks and online blogs say to get to the information office at Tsukiji Market’s Kachidoki Bridge gate entrance by 4am. Well things have changed and now I wouldn’t recommend arriving any later than 3:30 to get a spot. I got there at 3:35 and I was one of the last few admitted.

Once in you’re given a map with instructions on conduct in the market and a colored vest to wear identifying you as a guest of one of two groups of 60. I was in the blue vest group, the last to visit the tuna auction that morning. The room is divided into two for each group. The first is led into the auction area at 5:25 and is allowed to watch for 25 minutes. My team, the blue group goes in last at 5:50.

OK now the wait. For the blue team, almost 2 hours! Bring something to read or listen to because there’s not much to look at in this room.

The green team gets the signal to move to the auction area and my team is less than 30 minutes away from our visit.

The blue fin tuna is the star of Tsukiji but it’s only one of over 400 species of fish and seafood including seaweed, expensive caviar and controversial whale species sold at the market. Almost 3000 tons of seafood is processed everyday-making Tsukiji the largest fish market in the world.

Finally after being in this holding tank for almost 2 hours we were escorted by Tokyo Metropolitan Government security to the auction room.

There is a planned move in 2017 of the market to a new site. Tsukiji has been operating in central Tokyo since 1935 after the original market was destroyed by the 1923 Great Kanto Earthquake. It’s an extremely hectic and busy place and we are warned by our escorts to be very careful as many forklifts and turret trucks are constantly on the move.

We pass by one tuna auction site before being lead into the public viewing area for our precious well-earned 25 minutes into this fascinating world of high stakes tuna. The first blue fin tuna auctioned at Tsukiji this year was sold to the highest bidder at over $37,000 US dollars. The same sushi restaurant chain owner who won this year’s bid paid over 1.76 million US for a slightly larger tuna in 2013. 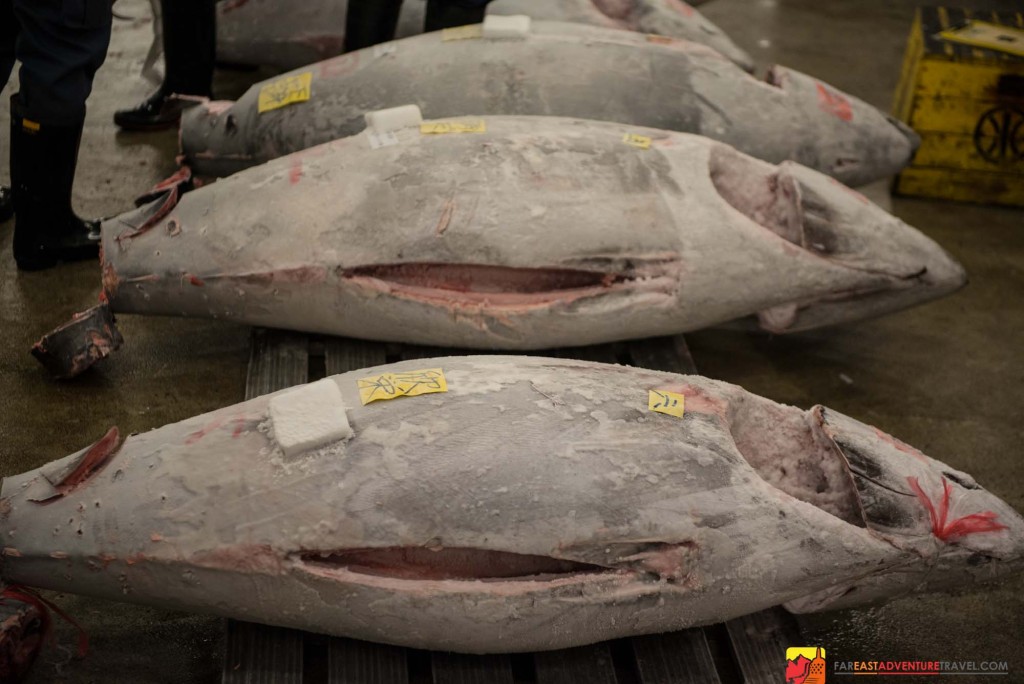 Intermediate wholesalers are busy inspecting the tuna up for auction this morning. It’s a very tricky game, even with the knowledge these buyers accumulate over the years to always get the tuna your customers want for the right price. The best can spot a seemingly lower grade tuna and get essentially a high grade product at a bargain price. 80% of the global blue fin tuna catch is consumed in Japan.

Meanwhile in the rest of the Tsukiji Fish Market the other 400 species of fish and seafood, including processed blue fin tuna is being purchased by buyers from small restaurants to hotel chains. Many stalls specialize in one type of product like this shop which is busy processing live eels. Anything you can think of that swims or lives in the sea is here including the star of the market, the blue fin tuna.

Back at the tuna auction final notes and inspections are completed before the first bidding. The buyers are all seen wearing caps with their license allowing them to bid on the tuna up for auction. They use elaborate hand gestures to signal the auctioneer what they are willing to pay. The bell is rung and the auction gets underway.

You don’t have to understand Japanese to feel the tension, excitement, and anticipation in the air of a winning bid. Multiple auctions take place in the room, the only way to move this much product in a morning. The drama and energy coming from the auctioneers is infectious making this a totally unique and memorable experience.

Waking up in the early hours of the day or staying up all night to watch a few minutes of a tuna auction may not be your thing. But if you really want to get an insiders view into the whole process of getting one of the most prized fish in the world to market a visit to the Tsukiji tuna auction is essential in understanding and appreciating this delicacy of the sea.

Subscribe to Far East Adventure Travel Magazine. Your digital inspiration to the world of adventure travel in Asia. Go to the iTunes App Store, search Far East Adventure Travel, download the app and get your free subscription now. Don’t forget to join the thousands who’ve liked the Far East Adventure Travel Facebook Page. You can also follow me on Twitter, Google+ and Instagram. All of the links are at breezy-size.flywheelsites.com. That’s it for this week’s episode more from Japan coming up, until then this is John Saboe thanks so much for joining me, safe travels and Namaste!